Genovesa is known as “the bird island” and it certainly honors its name. This horseshoe shaped island is a relatively small island is a low-lying volcano rising just above the ocean surface.

The island attracts an enormous number of pelagic seabirds that come there to nest. Great frigate birds, red-footed boobies, swallow-tailed gulls and storm petrels all breed here by thousands.

Due to its remote location and lack of fresh water Genovesa has remained unaltered by man; there are no introduced species on the island. 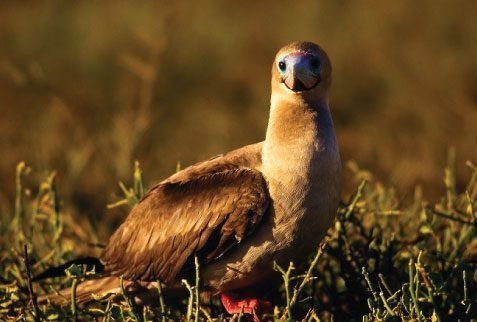 Darwin Bay Beach
This bay was created when the large crater of the island collapsed below sea level. The white coral beach in the middle of the bay receives visitors. Beyond the beach a series of tide pools carved out of black volcanic rock form a trail which follows the coast through the salt bush and mangrove, nesting area of the great frigate birds and red-footed boobies

The number of birds seems overwhelming, Nazca boobies soar overhead; great frigate birds display their pouches while resting on the nearby rocks and plants, mockingbirds scamper quickly across the sand. The mangrove zone offers wandering tattlers, lava gulls, whimbrels and turnstones a place to fish. Yellow-crowned, black-crowned and lava herons and White and yellow warblers have also been seen. It’s easy to see why Darwin Bay is a favorite of birders.

Prince Phillip’s Steps
A dinghy ride along the walls of the crater reveals the variety of animals that find shelter in the ledges and crevices of the lava; red-billed tropicbirds navigating their way into the small crevasses that harbor their nests, red-footed boobies perch in the palo santo trees, while frigate birds fly endlessly searching for food.

Reaching the shore the dry landing is at the base of the steep rocky steps named after his Royal Highness Prince Philip who visited the island in the 1960’s. The climb up the stairs can be difficult due to loose matter and the steps may be slippery, a handrail helps make the journey more manageable. At the top of the steps the trail becomes relatively flat and bird life abounds